There is a spot on the road in front of our house that, when it rains, creates a heart-shaped puddle.

When I sit in Eoghan's room, in the corner where Patrick's cot would have stood, working from home like so many people have been doing this year, I see that puddle. I see the reflection of the trees in it. I saw the colourful autumn leafs float in and dance around it as they fell. I saw nature hunkering down for another winter as a challenging year draws to a close.

Even though the presence of that puddle means it either is or has been raining, I like seeing it there. The fact that I can see it from what used to be Patrick's room, makes me feel closer to him. It's comforting.

Time has been relentlessly pushing on. In a few weeks, it will have been a decade since that day. So much has happened since but this still feels like it was only yesterday. While not as raw, that MISS is there every day - taking my breath away some days. The sense of "What just happened?" is near enough the same as then.

Over the past 10 years, there have been more losses along the way. There have been many happy times. We've welcomed Eoghan soon after Patrick died. Our rainbow, who helped me through that first year. We brought home Caoilfhionn almost 6 years later. A rainbow in her own right - a feisty one, as it turns out. We both turned 40.

This year, lock-down meant Patrick's birthday came and went without us being able visit his grave.

This year has been one of the strangest in a long time. Much of what makes our experience of life living, has been put on hold. Plans were canceled....sometimes multiple times. It's been tough. Mentally especially as a lot of what sustains my own mental health I found myself unable to do. However, I re-discovered things that I have not been able to do a lot of in the last years...I sketched, I listened to some audio-books and I found I really enjoy watching the local bird population attack our feeder and see what sort of birds we get in our garden.

10 years living with a piece of me missing. The longest 10 years gone in the blink of an eye...

So as I look out at my heart-shaped puddle, I remember my little curly haired boy and this special bond he had with the cat. Today and always.

Keeping his memory alive against the tide of time. 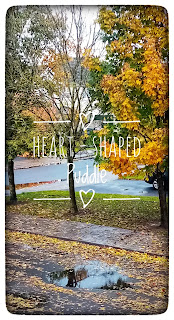 Steph
On January 25th 2011, my husband and I lost our first born and until then only son to SUDC. Sudden Unexplained Death in Childhood. Writing seems to have helped me process some of what is happening to us along this strange road that we never thought we would find ourselves on. After having been blessed with a wonderful rainbow baby shortly after that loss, we have more recently suffered an early miscarriage. All opinions expressed are my own personal opinions and experiences following the death of our darling Patrick and the loss of our little bean. Every persons journey through grief is very different...there is no right or wrong or set timeline...So what I write is my own personal way of trying to make sense of all of this.